Participation in the Conference of the Parties to the United Nations (COP20), Perú

Ph.D. Bárbara Jacob, postdoctoral fellow Millennium Institute of Oceanography (IMO) at the University of Concepción participated in the COP20 for the dissemination of scientific knowledge about the adverse effects that climate change is having on marine biodiversity. The outreach work that was done is a continuation of awareness taking regarding to the ocean acidification in the meetings of the UNFCCC United Nations Climate Change 2009, 2010, 2011, 2012 and 2013. Here, the IMO with a number of scientific institutions participated as an international alliance, emphasizing the concern about the impacts of multiple stressors such as the ocean warming, acidification and de-oxygenation of the marine ecosystems, which would be happening in the coming decades.

During the 1- 6 days of December, participants of UCRP/Chile side booth were dialoguing with political delegates, NGOs, ministerial advisers and others private institutions from different countries, about the potential dangers to the oceans and food safety in coming decades. The topics were focused on providing knowledge about how the climate change is changing the pH of the surface layer of the oceans (ocean acidification) and how affects the ocean biology, marine chemistry and physics. 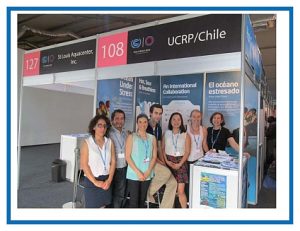 With the support of various written and audiovisual material was showed what will happen to the ocean in this century unless we reduce urgently and substantially emissions of greenhouse gases. For instance, it is expected that several areas of the ocean (“Hot spots”) experience more than one of these environmental stressors simultaneously, since these are caused by the same underlying process: increasing atmospheric CO2 and other greenhouse gases.

Some direct effects such as the damage to the physiology and behavior of organisms, changes in energy balance and formation of shells, which is occurring with the coral reefs. It was also emphasized that the combined effects of stressors increase the risk of food safety and industries that depend on healthy and productive marine ecosystems. Finally, it called for international politicians to understand the tremendous role of the oceans for sustenance of life on Earth, and the consequences of a high CO2 world to the ocean and society. 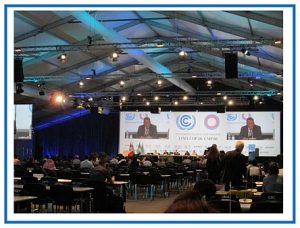 Presentation of the latest IPCC report