The Quest to Terraform Mars 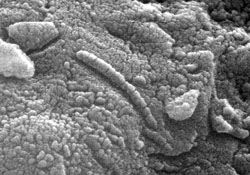 As space exploration continues to bring us closer to even the more distant planets of our solar system, and as the spirit of expansion that informs western civilization remains central to so many of our terrestrial philosophies, it is easily understandable that there should emerge in the scientific community the concept of “terraforming”—the attempt to transform an alien environment into one that more closely resembles the earth’s environment, particularly in its ability to support human life. Our article presents some of the very practical notions that are currently under consideration in the hope of turning this idea into a reality in our immediate future.

In August 1996, NASA scientists publicly announced that a meteorite discovered in Antarctica showed evidence of previous microbial life. Analysis of  the meteorite’s interior revealed the same gas and chemical ratio and composition that Viking had found on Mars, leading scientists to believe that the meteorite (see Fig. 1) had originated on Mars thousands of years ago, and that Mars had once harbored life, however primitive.

Although controversy still surrounds this discovery (many scientists contend that the biological evidence in the material is not the “tubular structure of carbonates” left behind by some microscopic life form, but a set of geometries created by chemical outgasings within the rocks), scientists do agree that billions of years ago Mars was a more hospitable place, with conditions similar to those that gave rise to life on Earth. Viking and Mariner pictures of the Martian surface reveal dry river beds and drainage patterns that could only have been created by water flow (see Fig. 2). 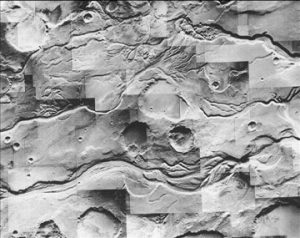 Figure 2. Ancient Waterways on Mars
Today, temperatures on Mars are well below freezing most of the time, and no liquid water exists on the surface of the planet. Human travel to Mars in the future will most probably reveal that “life” as we understand the term no longer exists there. If humans wish to colonize and eventually inhabit the red planet, two options exist: 1) We can build space stations and underground structures as habitations, wearing space suits every time we venture out on the surface, or 2) we can terraform the planet: introduce primitive life and transform the Martian atmosphere into a climate suitable for at least some life, perhaps similar to what it was in the far distant past.

Critics might say that terraforming is simply a human attempt at “playing God”; others might wonder if other planets throughout the universe could not have been likewise selected as the platform for life by some “superior intelligence” that deposited a few microbiological life forms in the right places only to return every hundred or thousand years to see how the planet was progressing.

Earth’s history itself is one of terraforming. Scientists believe that carbon dioxide (CO2) may have made up as much as 80% of Earth’s atmosphere around 4.5 billion years ago, diminishing to 30-20% over the next 2.5 billion years. Free oxygen was scarce-to-nonexistent in this early atmosphere, and indeed poisonous to most of the anaerobic life-forms that existed.1 Through some exceptional, even Divine “Force of Nature” photosynthetic organisms evolved that transmuted carbon dioxide into oxygen. Aerobic organisms, those that utilize oxygen, later evolved, and thus so did our “perfect” atmosphere. This atmosphere not only provides the right chemical elements for breathing, but gradually changed the earth’s temperature to allow mammalian life to thrive.

The current Martian atmosphere is around 95% CO2, 3% nitrogen and 2% argon, compared to Earth’s atmosphere of 78% nitrogen, 21% oxygen and a 1% mixture of other gases—argon, water vapor, carbon dioxide, nitrous oxide, methane, chlorofluorocarbons (CFCs), and ozone —all of which (except argon) have influenced the regulation of the Earth’s climate and brought the average surface temperature to a comfortable 15° C (60° F). What has become an important factor is how these “greenhouse” gases can rapidly increase, as we have seen in the 20th century manipulation, misuse and mismanagement of our ecosystem2 (see Chart 1). Yet without most of these atmospheric gases, so crucial to life, Earth would be a cold and barren planet, at least 12° C (over 50° F) colder on the average.3

While the atmosphere of Mars closely resembles that of primitive Earth, scientists have confirmed that Mars today has water, carbon, oxygen, and nitrogen. More significantly for its temperature, Mars has an atmospheric pressure that is only 1% that of Earth’s. For water to have flowed upon the Martian surface its atmosphere would have to have been thicker than it is today.

A primary factor in determining whether a planet like Mars can be terraformed is to determine if there exist (or could be introduced) sufficient greenhouse gases such as CO2 to create an atmosphere that would warm the planet at least to the point above freezing. Most scientists believe that there is a sufficient amount of CO2 on Mars, in its polar caps and in its surface soils (the regolith), to begin the terraforming process.

Two proponents of terraforming, Robert Zubrin (formerly a staff engineer at Lockheed Martin Astronautics in Denver, now president of his own company, Pioneer Astronautics) and Chris McKay (of NASA Ames Research Center), calculate that even a 4°C (7°F) rise in surface temperature on Mars would be sufficient to initiate a process that would eventually produce the overall necessary increase of 55°C (100°F) (current temperature on Mars is an average -60°C or -76°F), bringing the average surface temperature above the freezing point, permitting water to exist once again in liquid form on the surface, and transforming a thin atmosphere of 6-10mb into one in the hundreds of mbars.4 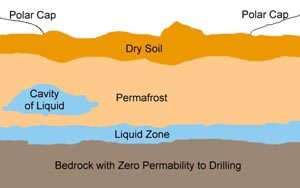 Zubrin and McKay believe the place to start is with the placement of orbital solar reflective mirrors on Solar Power Satellites (SPS) that would circle the Martian poles and focus sufficient heat from the sun to begin warming the caps and releasing CO2 into the atmosphere.5 This process would not destroy the polar caps but would melt a controlled amount, sufficient to start the thickening of the Martian atmosphere and global warming. Zubrin and McKay have also calculated that a temperature rise of 10°C (18°F) could further release significant amounts of CO2 from the Martian regolith (surface soils) and increase atmospheric pressure by as much as 200-300 mbs.

Another way to introduce greenhouse gases on Mars would be by drilling to release water vapor. Scientists now suspect that the surface permafrost layer of Mars might contain pockets of water at a drilling depth of 800 meters. Liquid zones at 800 meters would release hot water as well as water vapor. Water vapor itself is an effective greenhouse gas and in its vaporous state has an important heat -trapping “greenhouse effect.” If water is not found in sufficient quantities, drilling might find and release other gases that could assist the global warming.

Another means under discussion to introduce greenhouse gases is the establishing of factories on Mars that would principally produce greenhouses gases (CFCs) through the electrolytic and chemical methods which have contributed to “global warming” on Earth. Once Mars could support even the smallest forms of life, we would artificially follow the course that earth has taken, that is, introduce primitive bacteria that produce not only carbon, but methane and ammonia—strong greenhouse gases which could later be removed from the atmosphere when the planet had warmed sufficiently.

Although Zubrin and McKay estimate that Mars would only reach an atmospheric pressure close to that of Earth’s in 1,500 to 2,500 years, this is not an outlandish time frame. Man could live and work on the planet during the process of terraforming. In fact, with the proper implementation of all four factors—mirrors, drilling, factory-produced gases (CFCs), and bacteria—it could conceivably take less than 500 years for humans to be able to walk on Mars without a space suit, wearing only a small “scuba-type” breathing apparatus around their mouths.

Once the Martian atmosphere has thickened and temperatures have risen above freezing, the final stage of terraforming can begin. At that time, in addition to bacteria, primitive plants are to be introduced to aid in transforming the abundant carbon dioxide in the atmosphere into the oxygen necessary for more advanced forms of terrestrial life. This process could take over 100 ,000 years, with established organisms slowly removing CO2 from the atmosphere through the photosynthetic use of sunlight. Sufficient greenhouse gases would have to be present to contain the heat generated during this process and prevent the planet from cooling once again. Gradually, the oxygen content would reach a level where humans could breathe, a process that occurred on Earth several billion years ago. More advanced plants could not be introduced until the atmosphere contained enough oxygen and nitrogen for their survival.

Terraforming is not an impossibility; humans begin the process and nature completes the majority of the work. Terraforming only becomes a doubtful possibility if Mars lacks sufficient reserves of CO2, water and nitrogen, elements which are essential for life as we know it. But Mars seems to have an abundance of these important elements and, as McKay sees it, terraforming would help Mars revert to an earlier state when microbial life flourished, as evidenced in the Mars meteorite. Of course, if life currently exists on Mars in any form, no matter how small, we would not want to disturb its evolutionary process and must keep a “hands off” approach. However, if no life currently exists there, why not make it a better place—not only for human generations to come, but for all the other exobiological expressions of life in the universe that may surprise us with a new definition of life. 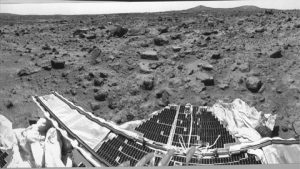 A View of Mars from Pathfinder

3 Earth’s atmosphere presently has a carbon dioxide leve of 0.03%;  estimates are that it could
rise to 0.09% by the year 2100 as a result of human  activities.