Studies on the Rings of  Saturn

A program of investigation of Saturn’s rings must include experiments in superconductivity. The authors’ hypothesis of the superconductive material states of the rings of Saturn makes it possible to add to classical planetary ring theory a non-conflicting superdiamagnetic model. By incorporating the physical effects and phenomena associated with superconductors during interaction with the magnetic field, many problems of planetary ring behavior will be solved.

Of the problems and answering hypotheses put forward by the authors, the four following examples address the physical effect of the planet’s rings:

PROBLEM 1: VARIATION IN THE AZIMUTH BRIGHTNESS OF SATURN’S A RING PARTICLES

Thesis: Orientation of elongated particles is normal to the magnetic field lines.

For an explanation of the phenomenon of the variable azimuth brightness of Saturn’s A ring, hypotheses based on the assumption of synchronous rotation of particles, or with the asymmetrical form as extended ellipsoids, or with asymmetrical albedo of the surface, were put forth.

Fig 8.1. Orientation of the prism of superconducting ice in the magnetic field of Saturn.

It is also known that at temperatures below -22oC growing snowflakes get the form of prisms7. Thus, the prism of superconducting ice will be orientated perpendicularly to field lines of polhodal (HP) and toroidal (HT) constituents of the magnetic fields of Saturn.

PROBLEM 2: THE FORMATION AND DEVELOPMENT OF “SPOKES” IN SATURN’S B RING

Thesis: Push-out of superconducting particles from the rings plane or their reorientation by magnetic anomaly.

Spokes in the ring B of Saturn, as well as the spokes of any wheel, are  located almost along radii . It must be said that the existence of radial structures in a planetary ring throws a call to all traditional representations. The fact is that according to the laws of Kepler, the areas of the wide B ring farther from a planet rotate slower than those placed nearer. Therefore any  radial formation should be distorted and washed out for a few tens of minutes.  The characteristic sizes of ‘spokes’ are about 104 km along radius and about 103  km along the orbit of the ring. They consist of micron and submicron  particles.

Until recently, the structure of the rings of Saturn was explained exclusively as the action of gravitational forces. However as soon as ‘spokes’  were found, there was an assumption that they are connected to electromagnetic interaction, as they rotate almost synchronously with the magnetosphere of Saturn.

It is difficult to give a detailed analysis of the formation of spokes as we don’t know which script is realized. Definitely it is possible to say, that the  hypothesis about the superdiamagnetic condition of the substance in the rings of Saturn can work both for the orientation hypothesis of spokes formation, and for  the levitation one.

PROBLEM 3: HIGH REFLECTION AND LOW BRIGHTNESS OF THE RING’S PARTICLES IN THE RADIOFREQUENCY RANGE

Thesis: The existence of critical frequency (~1011 Hz) above which electromagnetic waves are absorbed and below which ones are fully reflected. 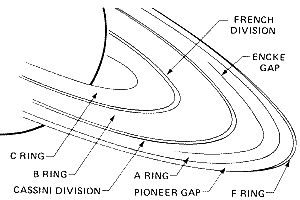 The opening of strong radar-tracking reflection from rings of Saturn in 1973 was surprising[2]. It turned out that the rings of Saturn actually have the greatest radar-tracking section among all the bodies of our solar system. Originally high reflection and small brightness of ring particles to radio waves implied that the ring particles consisted of metals[2]. The data from Voyager I and II later excluded this possibility.

The superconductors of type I practically have no resistance up to frequencies of 100 Mhz[4]. At a frequency of about 100 Ghz there comes a limit, above which the frequent quantum effects cause a rapid increase in resistance.

Fig.3: (Top) Brightness temperature of rings when the lengths of waves are from 10:m up to 10cm. Transition from radiation of a black body (100 micron) to practically complete reflection is observed.
(Bottom): Surface resistance of superconductor (niobium) as a function of frequency at temperature 4.2 ºK.
To understand these two dependencies the following explanation is necessary: according to Kirchhoff’s radiation law, a body which under a given frequency and temperature absorbs more radiation should more heavily radiate, and vice versa.

‘Voyager’ research has shown that the rings radiate strong electromagnetic waves which are probably (a) the result of interaction between charged particles of ice, or (b) a result of destruction and friction among ice particles when collisions occur. If this is the case, then it is probably necessary to admit that the complex movement of the particles that form the rings of Saturn, depends not only on mechanical forces which have been previously taken into account, but also on other interactions, for example, on electromagnetic ones[5].

During both encounters of the ‘Voyagers’ with Saturn planetary radio-astronomy, the experiment (PRA) has shown fixed, non-polarized, very broadband radio radiation, through all observable ranges of the experiment (20,4 kHz-40,2 MHz). These incidental radio discharges are called Saturn’s electrostatic charges (SED). The average period of SED was determined by Voyager I and II to be 10 hour 10+-5 min. If the ring is a source of SED, the area of the source can be located at a distance of 107,990-109,200 km from the planet according to measured periodicity[6].

of the electrical or magnetic field occurs, the weak link will generate electromagnetic radiation with frequency proportional to the loss of power in this transition. The ratio between frequency n and voltage in transition V looks like n=2eV/h, where e is a charge of an electron and h is a Planck constant. The ratio 2e/h is equal to 483,6 MHz/mV[7].